New issue of the Leveller now available - link here for the PDF, or available from Just Books in Belfast. 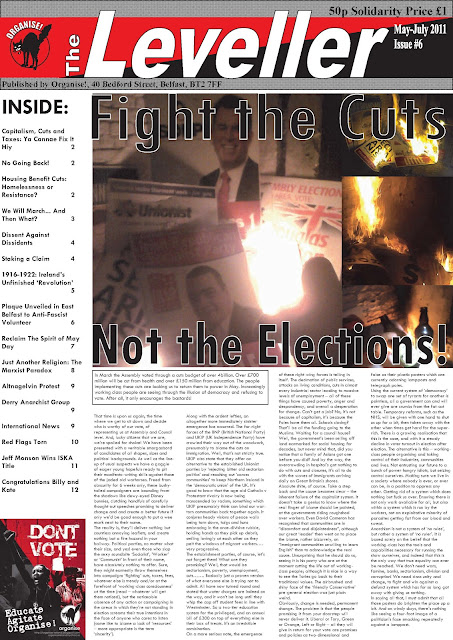 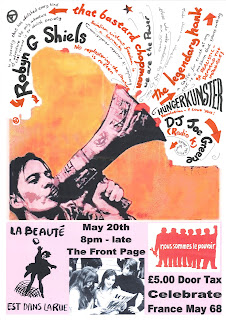 
£5 door tax - all proceeds to Just Books Collective
Posted by Who We Are at 08:31 No comments:

Book Launch - Soccer Vs The State by Gabriel Kuhn 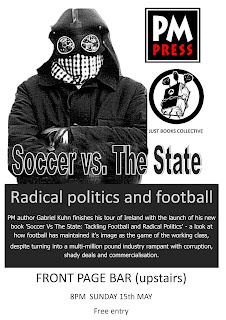 PM author Gabriel Kuhn finishes his tour of Ireland with the launch of his new book 'Soccer Vs The State: Tackling Football and Radical Politics' - a look at how football has maintained it's image as the game of the working class, despite turning into a multi-million pound industry rampant with corruption, shady deals and commercialisation.


Front Page Bar (upstairs)
Donegall Street
Belfast
Sunday 15th May 8pm
Free Entry
Posted by Who We Are at 08:28 2 comments:

On a rainy lunchtime on the 13th January, Organise! members and supporters picketed the Alliance Party HQ in South Belfast in protest of their recent statements supporting the immediate introduction of water charges.

While we face a double-tax on water of up to £400 pa, on top of increased rates, the chief executive of NI Water Laurence McKenzie, faces a yearly salary of £250,000.
Over 40,000 homes across Northern Ireland had their water cut off over the festive period. As a result McKenzie faces the possibility of a £ 1/2 million golden handshake. Not a bad result – plus we can guess he wasn’t one of the thousands queuing for water in sub-zero temperatures!


NIW estimate that the cost of fixing the water system and bringing it into line with the rest of the UK is £50m a year over a ten-year period. That’s an estimated total of £500m! But whose pocket will this be coming out of? Logic would dictate that the executives of NIW and the politicians who have presided over the running down of our water service be made to pay for their own failures. But the reality is, as it always is, it’ll be the working class who are punished and made to fork out.


He also stated that since the poor and vulnerable are more dependent on public services, it is somehow ‘unfair’ not to tax them £400 a year for water! “Avoiding water charges means deeper cuts in public services”, he says. No mention of removing the cap on industrial rates, or the cap on rates on properties worth more than £400,000.


This is no oversight – the Alliance Party, along with the rest of Stormont and Westminster, want the working class to pay for their and their cronies’ crises! Not big business or the super-rich, their partners in crime, but the layer of society least able to pay.


United working-class action has forced the deferral of water charges until this point, and we will continue to fight until they are defeated entirely.
Posted by Unknown at 05:13 No comments:

Just Books is kicking off the first music event of the new year on the 24th February courtesy of the lovely Chappy, who will be playing his unique 'blues n roll' style of musical mashings. 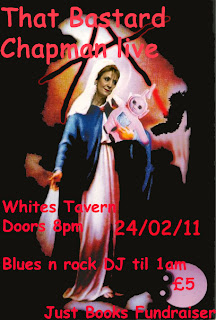 As usual there will be a rock n blues DJ after the main gig until 1am, and all proceeds will be going to Just Books.
Doors 8pm, Tax a fiver, blah blah blah.
Posted by Who We Are at 10:48 No comments:

Protest Against Attacks on Education

On Wednesday 15th December the Executive at Stormont announced their draft budget. Sammy Wilson claimed it proved the Executive could "take difficult decisions" and indeed it does. It proves our politicians can implement attacks on the working class like politicians the world over.
Far from protecting working class families this budget sees asset stripping, pay freezes and cuts as the way out of a crisis of capitalism. There can be no mistake, with the real level of unemployment in the north at around 100,000, more jobs will be lost while government sets about attacking benefits and the most vulnerable. As well as riding roughshod over the workers, the Assembly now prepares to vote on whether or not to raise tuition fees to a potential staggering £9,000 per year, and implement cuts in EMA. This will make tertiary education simply inaccessible to working-class people and ensure education is once again the privilege of the few who can afford it, rather than a right for all.
The alternative to this budget is already within our grasp, students have shown the way forward. We need to take this campaign onto the streets and leave the political parties in no doubt that we, the working class, will oppose these attacks. We are facing all out class warfare and we must fight back - hard!
Organise! members have been closely working with FEE and the NISA in building a strong, united campaign against these attacks, but what is needed is united working-class action across the board.
Protest against education cuts and order the politicians to listen - meet this Saturday (29th) at 1.30pm outside the Arts College in Belfast for the demo.
Posted by Who We Are at 10:37 1 comment:

Organise! are holding a meeting for supporters, sympathisers or those simply interested in the organisation to talk about who we are, what we do, where we are now and how we can move forward in the new year.

The meeting will be mainly based around open and informal discussion between attendees and Organise! members, on a variety of topics including building, recent struggles & protests, the organisation as a whole and what we should do in the next 12 months. Other topic suggestions also welcome.

Organise! are an anarcho-syndicalist group in Ireland. Our aims and principles are listed below as is a bit more information about what we stand for. Please have a look around and if you want any more information, feel free to contact us using the listed details.
We publish a quarterly newpaper, The Leveller, and regular news bulletins. Links to issues of the Leveller, from issue 6 onwards, can be found below.

FIND US ON BAKEBOOK